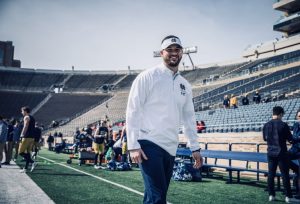 In September, a partnership with Ohio State University Wexner Medical Center Sport Medicine led to Licking Heights High School’s First Strength and Conditioning Coach, Coach Cody Coley. Coley has the experience and certifications valuable to a high school program. Prior to taken on the Licking Heights Strength and Conditioning Program, Coley spent the summer at Cincinnati Hills Christian Academy working to revamp the football strength and conditioning program with CHCA  Director of Sports Performance Adam Atallah, a team that is currently 8-2 and will earn a 2019 State Playoff appearance. 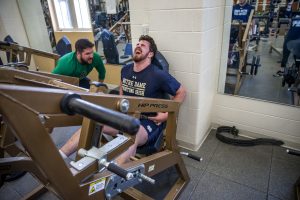 Before the stop in South Bend, Coach Coley was the Head Strength and Conditioning Coach at Middletown High School in Middletown, OH, were he led the strength program for 19 High School Sports and managed 2 weight room facilities netting over 5400 square foot. Coley help develop the structured schedule and weight room that Middletown had never had.

“Cody has a tremendous amount of energy, enthusiasm, and passion for helping others set and reach their goals. I know our student-athletes and coaches will benefit tremendously from his expertise and motivation,” said Former Middletown Athletic Director Aaron Zupka.

Coach Coley is a native of Wynne, Arkansas ( 45mins West of Memphis, TN) were he played Quarterback at Powerhouse Wynne High School  for Hall of Fame Coach Don Campbell.  He spent 2014 to 2018 as the Head Strength and Conditioning Coach for two separate Inner-City Memphis High Schools. Prior to taking the role with Middletown High School, Coley worked with Middle College High School were in addition to being the schools Head Strength and Conditioning Coach he was Co-Offensive Coordinator/QB Coach and Head Boys Track Coach. Coley led the Bulldogs track team to a 3rd place overall team finish in the City of Memphis and sent 4 events to the Tennessee State Meet. He received the Commitment Award in 2018 for his efforts serving the Bulldogs Athletic Program.

Coley, a two-time graduate of Arkansas State University, holds a Bachelor of Arts in Philosophy and a Masters of Science in Disaster Preparedness and Emergency Management. In 2010, Coley graduated Top of his Cadet Class from the Arkansas Law Enforcement Training Academy (ALETA) and won the TOP Physical Training Award, he would go on to serve as a Police Officer for four years. He is a certified strength and conditioning specialist through NSCA and holds the USAW Level 1. He is also a certified Interscholastic Coach by NFHS and holds a Speed and Explosion Specialist Level 1 certification through  National Association of Speed and Explosion.

“It’s time to Set the Standard, this school is a sleeping giant in the state of Ohio. I believe this school  has a lot of talented young student athletes who are eager to develop a winning mindset on and off the playing field while building Licking Heights into a powerhouse of Ohio sports. Attack the Day” said Coley.

Coach Coley can be contacted at codylcoley@gmail.com, on twitter at @CoachONEMORE.