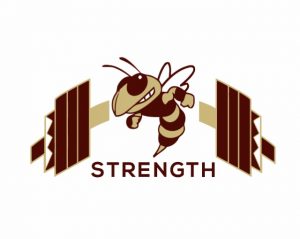 IRON HORNETS OF THE WEEK 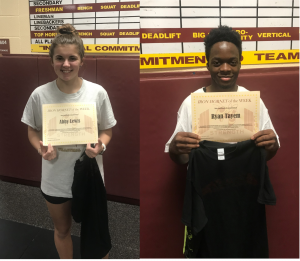 Abbey Lewis – Girls Volleyball ( Sophomore) – Abbey is great in the weight room, she brings a lot of energy and enthusiasm every-time she enters the weight room. She seeks to be pushed and is never afraid of a challenge.

Ryan Tayem – Boys Volleyball ( Sophomore) – Is new to the weight room, but you would not know it when you watch how determined and hard he works. There are many challenges that have been presented to Ryan in the weight room, but he embodies the Relentless Effort/Unshakable Attitude philosophy.

Both of these athletes are great teams, hard workers, and they SET the STANDARD!  Hornet TOUGH! 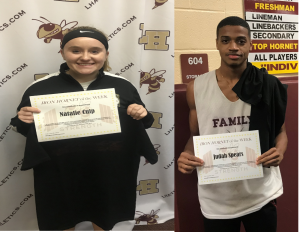 NATALIE CULP ,Freshman,(GIRLS SOCCER) OVER THE LAST MONTH AND A HALF NATALIE HAS MADE EVERY WORKOUT WITH OUT WAIVER. NOT ONLY IS HER CONSISTENCE EVERYTHING A COACH COULD WANT, SHE NEVER FLINCHES IN THE WEIGHT ROOM AND SEEKS THE HIGHEST DEGREE OF CHALLENGE, EARNING HER IRON HORNET OF THE WEEK.

Judah Spears,Senior, ( Boy’s Basketball)  Judah is dominate in the weight room. He push himself to the limit every time the Basketball teams trains. He was a SWAT Team Leader during the Preseason Basketball SWAT Challenge and earned TOP IRON, meaning, he had the most individual points in out performing his teammates by a healthy margin. 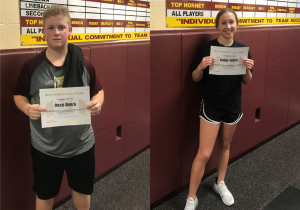 Girls Volleyball, (Sophmore) Gabby Collins earned Iron Hornet of the Week  when she fought through a cold and never missed a day of training. Adversity hit, but it did not beat Gabby!!

Boy’s Volleyball, (Sophmore) Owen Houck earned Iron Hornet of the Week as he has embodied the ATTACK ADVERSITY mantra. He attacked the weight room every day leading his team in the Attack the Board work, keeping his teammates focused on the the mission for the day, and he ALWAYS makes sure the weight room is put back in the attention to detail manner in which the STANDARD demands.

These two Hornets earned an Hornet Strength shirt and a certificate for their relentless efforts!